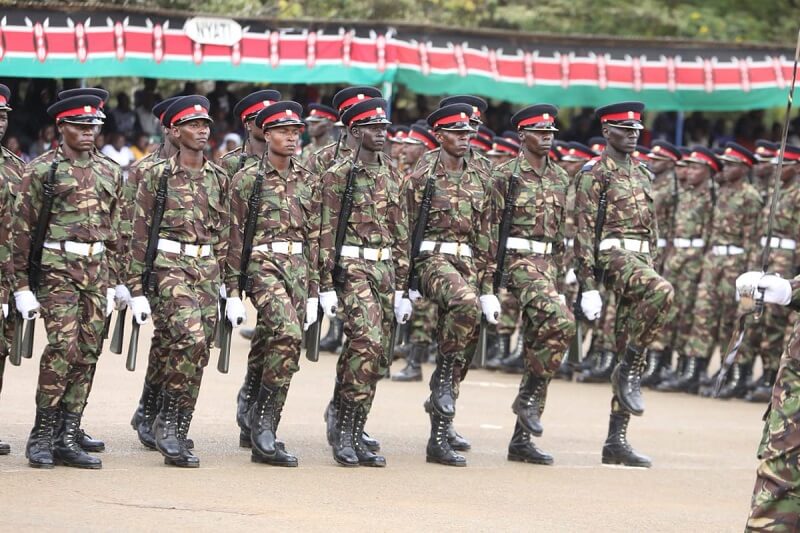 Are KDF salaries the biggest motivator for Kenyans dreaming to join the force? This is one question that has troubled me for a while and today we’re gonna find out if it’s true or not.

As a mwananchi witnessing the events of this Lord-forsaken country, I find it hard to convince my mind into joining the Army to fight for the country. There’s so much wrong with our leadership and society that I’d rather spend more time fighting for my needs just as everybody else is.

Which begs the question, why do so many Kenyans wish to join the army? Every year, KDF recruitment programs are held around the country and thousands flock into recruitment grounds to try their luck.

These citizens undertake the rigorous tests which often hospitalizes some for an opportunity to hold the gun against terrorists. Others go even further to bribe recruitment officials in the tune of hundreds of thousands of shillings for this chance.

First, considering the high unemployment rate in the country and low standards of living, it’s obvious any job opening will receive an avalanche of applications.

So, for these recruitment grounds to be flocked with thousands of hopefuls, it’s expected. Kenyans just want something that can put food on the table. Anything that suffices, no matter how risky.

Now, when some people go to the extent of bribing to get this opportunity, it means that they are expecting huge returns from the trade. Nobody pays for a loss.

So I did some digging on the web and came across the salaries of KDF soldiers from the lowest rank to the highest. Interestingly, it’s not what I expected but with a little more digging, I found out the hidden monetary perk that does the magic.

Before we could dive in, it is worth noting that the Kenya Defense Forces (KDF) is divided into 3 categories; Kenya Air Force, Kenya Army and Kenya Navy. All three sectors are charged with the duty of defending and protecting the sovereignty and the territories of the country from their different fronts.

Also, while a majority of soldier function as warriors, there are some with specialized skills who operate as technical soldiers.

These chosen few with skills in computer, engineering among other fields work to improve the efficiency of the KDF and as expected, earn considerably more than the rest despite their lower exposure to risk.

However, during recruitment, all applicants must undergo the same rigorous tests before joining the KDF and branching within the force.

Now with all that in mind, let’s get to the salaries of KDF soldiers. KDF salaries are scaled depending on the ranks of soldiers. The lowest rank, recruit earns the least amount of money while the highest-ranking solder; the general rakes millions.

The structure above does not list Kenya Defense Specialist Officers. As mentioned earlier, these are soldiers who join the army with a special skill usually attained through professional training from universities.

The salaries for these type of officers are not publicly accessible at the moment but from word of mouth, they are lucrative and characterized with handsome remunerations.

KDF basic salaries are not as attractive as one would expect. Of course, the top-ranking officials earn a lot but for most soldiers who exist in the bottom 5 ranks, their salaries are not something to salivate for. Lucky enough, there are additional sources of income which increase the earning potential for any soldiers.

Unlike Kenya Police, KDF is well finance by the government which allocates a total of 100 billion annually for its use. Also, it is lucid that Army officials have higher standards of living as compared to police who are forced to bribe citizens to finance their government-forsaken livelihoods.

Honestly, I feel that the police force ought to be well-financed and their officers paid well to reduce corruption in the country, but that’s a topic for another day.

So what are these added advantages?

First, army officers who live within army barracks pay half the price of normal day to day commodities compared with normal citizens. This means a packet of Unga is half the price in the barrack’s premises. The government probably pays the other half price through contracts with business persons serving Army soldiers.

Second and most important, KDF Soldiers get great allowances for taking part in peacekeeping missions especially outside the country. These allowances which range from Ksh 5,000 to Ksh 10,000 per day can easily enable a soldier to rake millions in a few months.

And that’s just for the low ranking soldiers. Higher ranking soldiers such as Captains, Majors and Colonels earn much more. This revelation confirms why people claim there’s money in KDF!

Getting Good Salaries in KDF

The only sure way of earning handsomely while in the KDF is to rise in ranking. Unfortunately, this is not something every KDF officer can do because of the limited seats available. Only a few will rise depending on their skills and sadly, how well they know the big men and women.

With a specialized skill acquired from university, you have a higher chance of rising in ranks. The underlying condition, however, is that you must be ready to serve faithfully for many years before you are considered for any promotions.

For instance, it takes 3 years to scale each rank from recruit to Captain. By the time you become a major, at least 10 years of outstanding service to the country must be under your name. Scaling further above majorship is even harder considering the high competition and limited spaces.